What's all this XR Stuff?

XR, VR, AR, MR, 360; with technology advancing so quickly, new terms keep flying around and it’s hard to keep up with what they all mean. With extended reality becoming more common in fields across the board, understanding the latest tools is essential to remaining on the cutting edge. Here is a quick overview of the different designations around the new alternative reality technologies, and examples of what they mean.
XR - Extended Reality
Extended Reality is a catch-all term that covers every sort of mixture of the real world in combination with virtual overlays. Usually used as shorthand for “alternative reality technology,” XR can also mean advancements in the field that are expected in the future, but cannot be predicted yet. 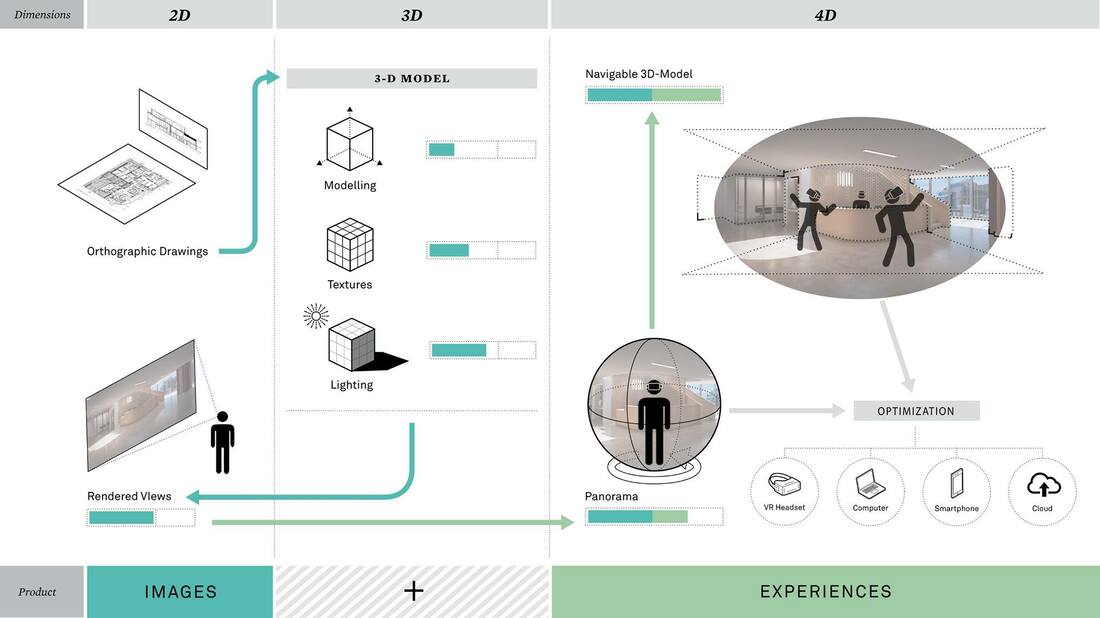 2D, 3D, and 4D visualization
VR - Virtual Reality
A theme in Science Fiction for decades, Virtual Reality became a mainstream term with the highly successful launch of the Oculus Rift DK1 in 2013. VR is a filmed or computer simulated 360 degree environment, completely different from the one the viewers physically inhabit, that they can exist in. An example of VR is a rendered model of a famous building that participants can enter and walk through while physically standing in their office or living room.
AR - Augmented Reality
In Augmented Reality, the real world is always present, but additional information overlays it. The overlays are usually rendered, and are triggered by either the environment itself or specific markers. AR is often monoscopic, which means the same image is presented to both eyes, such as with viewing Pokemon Go using a smartphone. A famous exception is Magic Leap, the stereoscopic AR headset we use at Agile Lens.
MR - Mixed Reality
Mixed Reality refers to using a VR headset to overlay simulated content on the real world. It can also mean using a green screen to show outside viewers what is happening in VR. On the surface, it’s easy to confuse Mixed Reality with Augmented Reality. MR holds some key differences. Most importantly, MR uses a VR headset. This means that the view is stereoscopic, or that different images are presented to each eye, just as two eyes function in reality to give depth perception. It also means that the experience can be controlled by the viewer. Rather than being trigger-generated, speculative content can be placed by the viewer in a real-world space. An example is a person moving a computer generated table around a 360 degree image of their dining room, viewed through a VR headset.
360
Not a VR experience, 360 is a wrapped around photo that can be viewed from a device like a smartphone or tablet. Like Google Street View, you can look around but there is little sense of scale or place.

How is XR Valuable?

A well-crafted immersive experience is the ultimate communication tool. When used properly, XR provides a fantastic method for distinguishing your company, presenting your ideas clearly to your clients and collaborators, experiencing your designs, and giving your clients a tool they can use with their clients.